Memorial Day is a time to remember those who have served in the armed forces to protect the freedoms we too often take for granted. This past year, I’ve had occasion to learn that a number of my maternal Brown ancestors (descended from JOHN BROWN ~1595-1686) served in the Army in the Revolutionary War, the Civil War, and World War I.

Before these more or less organized armed conflicts, the Brown men joined other early settlers of New England in fighting the indigenous inhabitants of the area who were trying to protect and preserve their own way of life from the encroaching settlements.

As I discussed in a previous post, STEPHEN BROWN, John’s youngest child, was killed at the age of 18 in King Philip’s War on June 29, 1677. The battle took place at Black Point in Scarborough, Maine. Given that I now live less than two hours away from Scarborough, I thought it would be fitting this Memorial Day to go see the site where the battle in which Uncle Stephen [10 steps] was killed took place:

As the men marched in two or three files, the land gave way to an expanse of
marshland on their left, while the land rose before and to the right of them. It
took less than half an hour to march to the vicinity of Moore’s Brook, a small
waterway that led down to the marsh. They were about two miles from the safety
of the garrison, finding themselves upon an open plain—a bush here and there to
break up the landscape.1 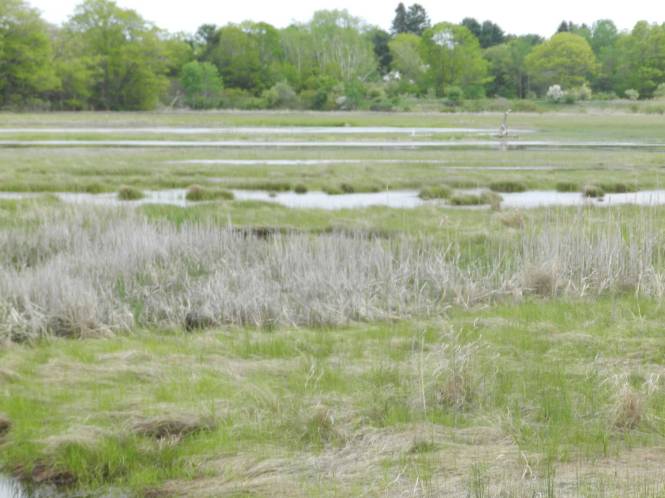 As the men started crossed over Moore’s Brook and started up the hill on the other side, the Indians attacked. . . . The war whoop, which today seems relegated to myth, was very real and, for those less resolute soldiers, must have struck them with terror. Up came the Indians from behind the bushes and up from the marshland to their left, across the across the plain from their right. What had started as pursuit of a few Indians turned into a full pitched battle.

The initial slaughter on the side of the English must have been horrific.
Lieutenant James Richardson was cut down soon after the first volley along with
others of his men. English and friendly Indians fell wounded or dead; others tried
to carry the wounded to safety, but shelter was two miles away and they were
facing an enemy that knew the territory well. Some badly wounded English found
ways to hide.

. . . .
Swett, showing great courage, rallied what men he could again and again,
and made a torturous retreat towards the garrison on the neck. The rout had
turned into a tremendous defeat and by the time Swett was within sight of the
garrison, he had suffered many wounds and was bodily taken by the Indians and
hewn to death. Of the nearly one hundred men who left the garrison, less than
half a dozen came back without a scratch. Nineteen out of twenty of Major
Clarke’s men were cut down. A doctor treated those who returned wounded. Fifty
to sixty of the New England forces were dead or mortally wounded, including
eight friendly Indians.2

After 340 years, some marshland still remains at Black Point, but the encroachment continues, with much of the site now given over to a golf course, a yacht club, and upscale oceanfront homes.

The final image of Black Point I’ll leave you with is this one, which just seems wrong to me. I’m unsure which aspect of Black Point’s history it trivializes the most–perhaps history itself?