Photo Back (Handwriting appears to be that of Martha Moore, Velma’s mother) “our house + Melissa’s, rail by the bridge; Tide is above bridge”

In my previous post, “In Search of VELMA BROWN [MOORE] (1897-1975),” I introduced my maternal grandmother and expressed my desire to learn more about her childhood in Economy, Nova Scotia. When I became keeper of The Family Archives in 2014, I discovered a number of photographs of both Economy and Velma’s family.  Looking back to the day I asked her about her childhood, I find it odd that she didn’t just take out the photographs and show them to me.

The photographs of Economy posted above are circa 1910-1920, with the last one dated 1935. They do nothing to dispel my sense that Economy at that time was a pretty grim place.

On the other hand, my impression of Velma and her family from other photographs is that they spent most of their time sitting on the porch, going for picnics, and digging for clams–all sepia-toned, wistful, and redolent of a bygone era.

In 2007, I drove my mother to Economy from Presque Isle, Maine so that she could show me where Velma had been born and grown up. Here are some pictures taken from that trip. As you can see, not particularly grim:

The other reason for the trip was so that we could pick up a packet of Moore genealogy from Eric Moore, a very distant cousin. When we met Eric, the family tree showed that we shared a common set of grandparents:

I didn’t know what to think. It was just confounding to me that here was this person to whom I was related, and not only did I not know him, I hadn’t previously known he even existed. How could this be? How could I share bloodlines with all these people in the world whose existence I’m completely oblivious to and always will be?

Is this the genealogist’s impulse, I wonder? 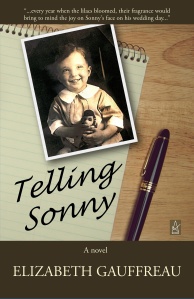