Velma Moore is third from the left.

Among my grandmother’s photographs in The Family Archives is this one taken with a group of girls from Dalhousie University in front of the Provincial Normal College (PNC) in Truro, Nova Scotia in 1918. Based this photograph and the fact that my mother’s history of the Moores indicated that Velma attended high school in Truro, I assumed that Velma attended the Provincial Normal College prior to matriculating at Dalhousie.

Thus, on my recent trip to Nova Scotia, one of my stops was at the Little White Schoolhouse Museum in Truro, which has an affiliation with the Normal College. 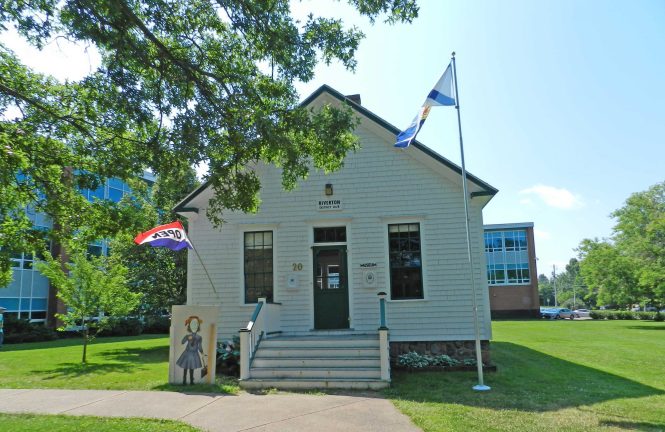 When the museum attendant remarked on all of the pictures I was taking, my husband explained my interest, and the attendant invited us downstairs into the archive room–my first foray into a physical archives room with living, breathing archivists. I knew for certain that Velma had been attending school in Truro in 1915, but the archivist was unable to find a record of her attendance at the Normal College in class photographs for the approximate years or in the actual enrollment or graduation records. (The enrollment records consisted of 3 X 5 index cards, one for each pupil, filed in a wooden card catalog with brass fittings. Quaint, eh?)

After leaving the archivist with my e-mail address, I went back to the group photograph that had sent me to Truro and discovered that I must have made an unwarranted assumption in thinking that the girls had all attended the Normal College.

If the normal college model in Canada at that time was the same as it was in the U.S., it wouldn’t have made sense for someone to go into a two-year post-secondary program right out of grammar school. The kicker is that I was already familiar with the normal college model, but I made the assumption and moved forward with it anyway!

Needless to say, I did some additional research on secondary education in Colchester County in the first quarter of the twentieth century. It appears most likely that Velma graduated from  Colchester County Academy. I’m not finding a source of digitized Nova school records that isn’t behind a paywall, so my next stop will be my local public library.